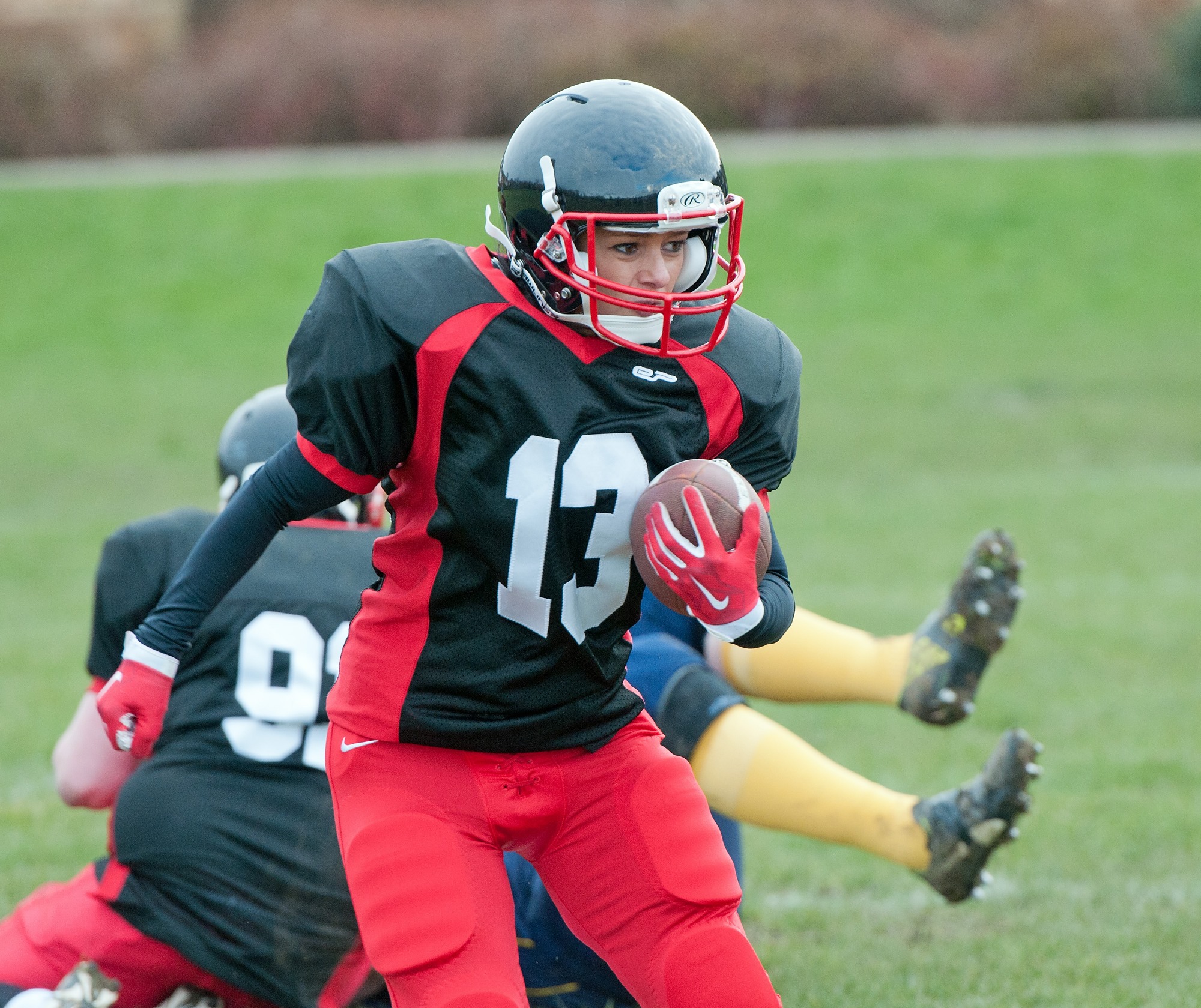 After taking part in the Opal Series for Flag Football during 2015, the East Kilbride Pirates Women’s team made their debut in the full contact, kitted equivalent, the Sapphire Series, in South Queensferry on Saturday.

In their opening game they faced the Teesside Steelers. The English side took the opening drive into EK territory, but consecutive tackles by Morgan Hendricks prevented them scoring. The Pirates failed to make much progress on their first possession though. Short runs by Zara-Louise Stevenson and Lindsey Robson led to an incomplete pass by Aynsley Barclay on 4th Down. Teesside then took the lead when Angie Barreiro broke a couple of tackles to run in a score from 15 yards.

The Pirates’ ground game saw a 20-yard run by Robson move the ball into the Steelers’ half, and further caries by Stevenson and Claire Cochrane moved the ball into scoring range but once more EK came up short. With half-time drawing near, Teesside scored again with a short 4th Down run from Vicky Watson. QB Laura Harbottle then passed to Rebecca Rafferty for a 1-point conversion to make it 13-0 at the break.

In the second half, the teams traded possession until a turnover brought the next score. A Barclay pass was picked of by the Steelers Jess Wright, who returned it 18 yards to the endzone. Harbottle then passed to Watson for the extra point, making it 20-0 in their favour. The Pirates fumbled the ball on their next Offensive series and Teesside immediately took advantage with Barreiro running the ball home from 24 yards. Vivienne Main broke up the attempted pass for the conversion, but the Steelers lead was now 26-0 and it remained that way until the end of the game.

Next up were host Club, Edinburgh Wolves who had just defeated Chester Romans 25-14 in a hard-hitting contest. An early Pirates’ fumble gave the home side good field position but it took them four attempts to score, with Jo Elder finally crossing the line. EK’s next drive also came up short, and the Wolves didn’t take so long to capitalise this time around. A 35-yard pass from Lynsey Llewellyn found Natalie Dewar all alone for the TD. The extra point pass was picked off by Jennifer Hutton to keep the score at 12-0. That soon became 14-0 however when QB Barclay was tackled in the endzone for a Safety. Strangely the referees gave the ball back to the Pirates after that and they made the most of the bonus possession. Runs by Robson, Heather McGowan and Amy Oliver took the ball into Edinburgh territory. A 14-yard pass from Barclay to Aimee Wilson then resulted in the first ever TD for the team and Barclay also found McGowan for the point after, cutting the deficit to 14-7. That remained the scoreline at the interval.

Edinburgh had the ball first after the break, but were unable to make much progress. Their Defense added another 2 points though with a second Safety of the game. The Wolves correctly got the ball back this time and put together a short drive to pad their advantage. Dewar running in her second TD of the day on a 17-yard reverse. That concluded the scoring despite the attempts of both sides, and Edinburgh ran out 22-7 winners.

Next up for the Pirates women’s team is their home tournament at Hamilton Palace sports ground on Saturday 12 March. The first games kick off at 1pm.