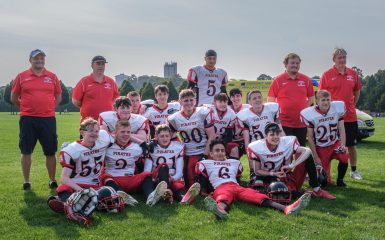 Formed in 2010, we welcome boys and girls aged 13 – 16. We play a five-aside contact version of the sport and compete in the Scottish U16 Conference of the British American Football Association’s National Leagues against Hamilton Buccaneers, Highland Wildcats and Edinburgh Napier Knights.

We supply all necessary playing equipment and team uniform – all you need is suitable practice clothing and footwear and a gumshield. Player subs are £180 a year, payable by a £15 monthly standing order split across 12 months from Oct-Oct.

This covers expenses for training, tournaments, equipment and other running costs and allows us to budget across the year. In addition, parents or guardians will be required to register their youth player with the league each year for competition and insurance purposes. This currently costs £15.00.

We train on Sundays from 10am-12pm and Tuesday’s 7-8.30pm at Duncanrig High School year round, with a short break over Christmas.  Please email juniors@piratesfootball.co.uk for more information and to register interest in joining.