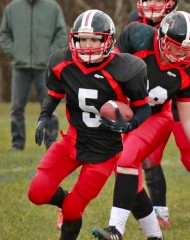 Kicking off was a tie against Chester Romans, the first time these sides had met. A whirlwind start by the visitors saw them score three touchdowns on their first three possessions. Actually the first came when the Pirates were on the ball. A fumble deep in their own territory was recovered in the endzone by Chester for the go-ahead score. Running back Helena Lasok-Smith added the 2-point conversion to make it 8-0. The same player ran the ball 35 yards to score on the first play of the Romans’ next drive to stretch that lead while QB Laura Hughes passed to Victoria “Kiwi” Batt for the PAT. It was the speedy Lasok-Smith who scored again on another long run before converting her own TD to make it 23-0. The Pirates finally got some offensive momentum going, and a pass completion from Aynsley Barclay to Heather McGowan kept the drive alive. This led to Barclay finding Aimee Wilson with a TD pass, then Claire Cochrane hauled in the 1-point conversion to further reduce the deficit. It looked like EK were going to reach the break just 16 points down, but on the last play of the half Hughes completed to Batt for another 6 points and Lasok-Smith added 2 more on the conversion.

East Kilbride fumbled away possession on their first play after the restart and Chester quickly capitalised, with QB Hughes completing a short pass to Batt for the TD. The Pirates defense was now starting to come more into the game, repeatedly shutting down their opponents. Indeed it took a high Pirates’ snap out of the endzone resulting in a Safety to add the next score. Lasok-Smith later went on to add her third TD of the day to conclude the Romans’ scoring at 46 points. It only remained for Barclay to complete a 35-yard pass to Cochrane for a late consolation Pirates’ TD. The conversion failed leaving the final score East Kilbride Pirates 13 Chester Romans 46

In the second game the Pirates faced Edinburgh Wolves who were coming off a low-scoring 2-2 draw with Teesside Steelers. Both sides went 4-and-out early in the half before a fumble recovery by Jen Calder gave the Pirates good field position. Following a short completion to McGowan, Barclay then picked out Cochrane for the opening score. The home defense were now in dominant mood and they forced a Safety when Edinburgh QB Lynsey Llewellyn had to bat the loose ball out of the endzone to avoid a TD. However, a Pirates’ fumble in their own half gave the Wolves one last chance before the break, and they took full advantage with Llewellyn completing the scoring pass. The subsequent conversion attempt failed leaving East Kilbride 8-6 ahead at the break.

The second half was a tense affair with both defenses well on top. East Kilbride, with the advantage of a narrow lead, made full use of the clock as well, keeping the ball in play to run down time. Possession went back and forward no fewer than eight times with neither side able to sustain any offensive momentum. Rather than risk turning the ball over late in the game, the Pirates took a knee just outside their own endzone, giving the ball back to Edinburgh for one last attempt. Playing “prevent” defense they held the Wolves at bay for seven plays before the game came down to a 4th-and 17 situation. A timely tackle by Nicole Smith meant that the Pirates had held on for their first ever win and set off joyous scenes on the home sidelines.

The Pirates’ MVP’s on the day were Lindsey Robson (Offence) and Angela Wilson (Defense). Wilson racked up 9 Solo Tackles, 2 Assists and an Interception returned 27 yards.