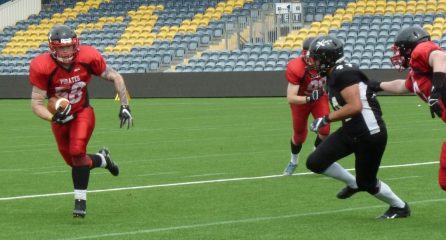 Their trip to Britbowl ended in heartache for the Pirates U19 squad when they had the title ripped from their grasp in the later stages after having led for most of the game.

East Kilbride received the kick off and quickly moved into their stride. Early runs by Jack Hunter and Struan Bailey moved the ball, and a Nick Kosic to Bailey pass took the game into Kent territory. However an Illegal Block penalty halted momentum, and despite an 11-yard run by Darren Robert on a fake punt, the Pirates turned the ball over. The Exiles’ much-vaunted passing attack was next up, but two sacks of QB James Cook quickly forced them to punt. Again EK gained yards, with their “hurry up” offence keeping the opposition on their toes. The drive faltered when a Kosic run on 4th-and-short was halted at the line of scrimmage. This gave Kent possession as the game moved into the second quarter.

The teams traded punts before it was the Exiles who broke the deadlock. Starting at their own 1-yard line, Kent were aided by a Roughing the Passer call, giving them more room to manoeuvre. Cook then moved them out to the 42-yard line before connecting with Connor Hassan, later to be named MVP, for the go ahead TD. The 2PAT run was stopped short, but the Exiles now held a 6-0 lead. That advantage was short lived however, as the Pirates bounced straight back. A Will Price run, sandwiched between two Kosic-Bailey completions moved the ball to Kent’s 14-yard line, and another Roughing call halved the distance to the goal line. From there Will Price ran the ball in for the TD and also added the 2-point conversion for an 8-6 lead that the Pirates held to the break. 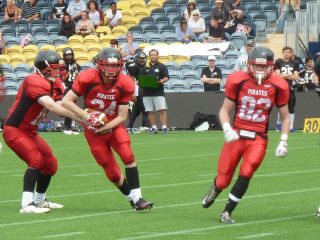 After the interval, Ryan Miller intercepted a wayward Cook pass, and from there the Pirates did get as close as the Exiles’ 6-yard line, but once more came up short on 4th Down. It was a case of the defences being on top as the sides swapped possession several times, and as the third period expired, the Pirates still held a narrow lead and everything was up for grabs.

East Kilbride’s first drive of the period was riddled with penalties, leaving them at one point in a 3rd-and-35 situation. Needless to say they had to punt, and this gave Kent a shorter field to work with, a bonus they gratefully accepted. On 2nd-and-12 from their 35-yard line Cook again found Hassan for a 65-yard TD. Cook also passed to Yani Ourabah for the conversion and a 14-8 advantage. Once again EK responded well and drove the ball to the Kent 3-yard line. However an untimely sack of Kosic pushed them back, and with a TD needed, the 4th Down run was stuffed in the backfield. As time ticked away, Kent were forced to punt, with the ball going out of bounds near mid-field. Having to go the aerial route, Kosic was then intercepted by Tom Lee, allowing his offence to kneel out the game and take the title.

There were more than a few tears on the Pirates’ sideline at the final whistle, but after some words of consolation and encouragement from their coaches, the young Pirates went up to collect their Silver Medals. These will provide memories of a campaign that saw them progress in leaps and bounds, and also the motivation to go one step further next season.