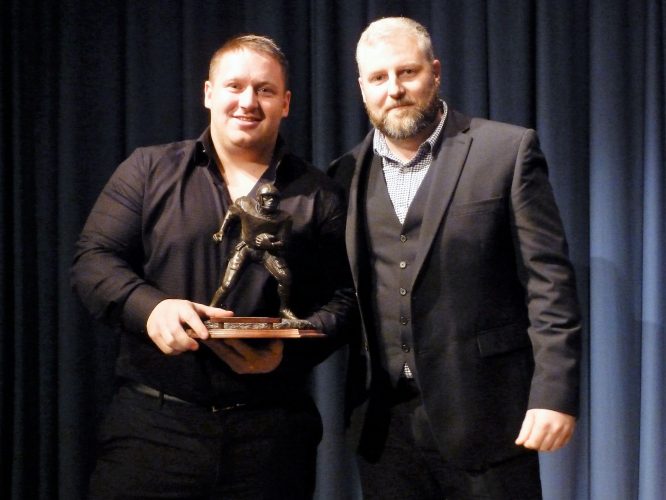 Over 80 players,coaches, staff and family members from the East Kilbride Pirates gathered at The National Piping Centre in Glasgow on Saturday evening for the club’s annual Player of the Year awards night.

The evening culminated with veteran defensive lineman Steven Kane being named as Player of the Year in recognition of his outstanding performance over the last season.

Steven is the first defensive player in over ten years to receive the club’s top honour. He collected an impressive three awards in total, also winning Special Teams Player of the Year, and Defensive Player of the Year.

The new Rob Worboy’s Players’ Player of the Year trophy was also awarded for the first time as part of the event. The trophy was commissioned by the club to remember defensive back Rob Worboys, who died suddenly and tragically in January from an undiagnosed cardiac problem aged just 27.

Defensive back David McInally was the first player to receive the new trophy which was presented by Rob’s father Ian. David and fellow team captains Steven Wilson and Jamie McLaughlin had earlier given a moving tribute to the much loved and missed player.

Hall of fame
As well as presenting player awards, two more members were inducted into the Pirates Hall of Fame as part of the evening. Launched last year as part of the club’s 30th anniversary celebrations, the Hall of Fame is designed to recognise the invaluable contribution of players, coaches and staff who’ve had a huge impact on the success of the East Kilbride Pirates over the years, both on the field and off.

The first 2016 inductee was Alastair MacDougall, who played for the team between 1985 and 1995. Initially a linebacker, Alastair moved to running back, where he became a prominent and permanent feature of the Pirates team for many years. He achieved the Club’s first 1000-yard season in 1992, his strong running becoming an integral part of the offensive scheme.  The second inductee of the night was fellow running back Willie Brown, who played for the Pirates between 1997 and 2003. Willie went on to become the Club’s leading rusher at that time, with career stats of 812 carries for 5,878 yards, racking up an impressive 59 touchdowns. 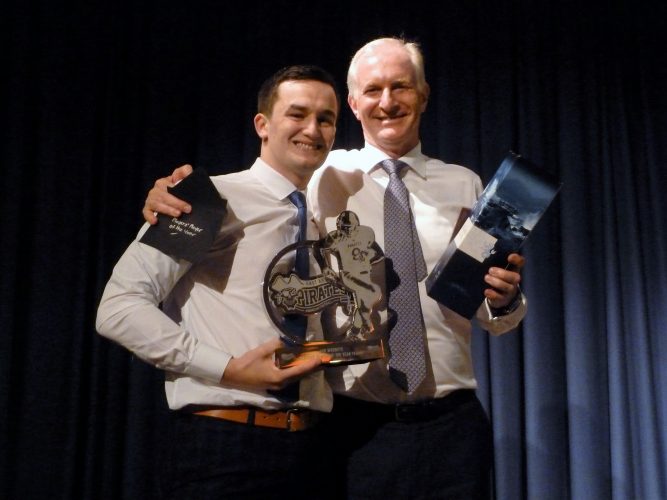 “We know that 2016 wasn’t the best of years for our senior team, both performance-wise and personally with the sad loss of Rob,” reflected Club Chair Amanda McDonald. “I think that made it even more important for us to celebrate the successes we did have, especially the outstanding individual performances of many of our players. Steven Kane’s triple award win is hugely well deserved. He was the rock of our defense this year, and impressed visiting US college coaches in June so much they named him game MVP without hesitation. We were also delighted to see David McInally named as Players’ Player of the Year. The award is voted on by the players themselves, and through his leadership and commitment on and off the field, David very much reflects the spirit of the Pirates. We’re sure Rob would have approved.”

The Pirates are now hard at work planning for the 2017 season. A try out session for new players will take place on Sunday 8 January from 12-3pm on the indoor pitch at Hamilton Palace Sports Ground. To find out more contact info@piratesfootball.co.uk