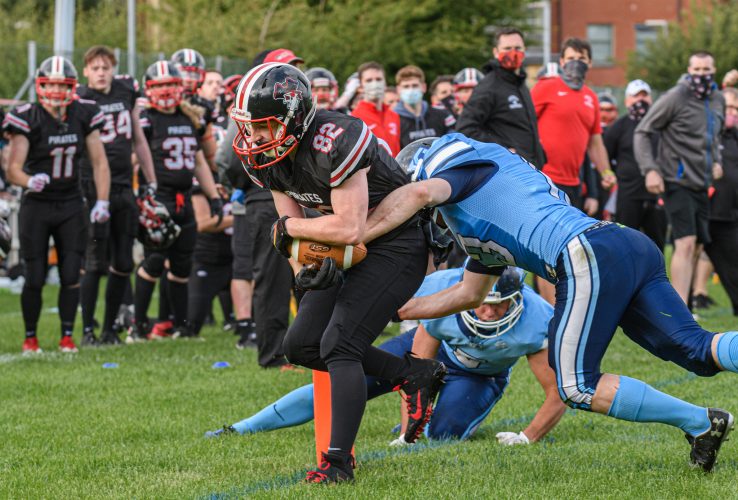 A short opening drive came to a halt when the home side had to punt.  An early holding penalty put the Goliaths on the back foot, and two plays later the Pirates’ defense swallowed up the running back for a safety. With both sides keeping the ball on the deck, the period ended quickly and without any further scoring.

East Kilbride were in possession as the second quarter started and swiftly rounded off the drive with a 5-yard touchdown pass from Neil Baptie to Andrew McBride. Scott McDonald added the extra point for a 9-0 lead. Inverclyde bounced back and ended a 10-play drive with a 22-yard scoring pass. They came up short on the 2-point conversion attempt, but had narrowed the gap to just 3 points.

EK restored their advantage before half time. Their momentum seemed to have come to a halt, but they recovered a fumbled punt return to regain possession. The reward for this Special Teams play came in the shape of another Baptie- McBride TD (11 yards) and McDonald PAT to leave the Pirates 16-6 up at the break. 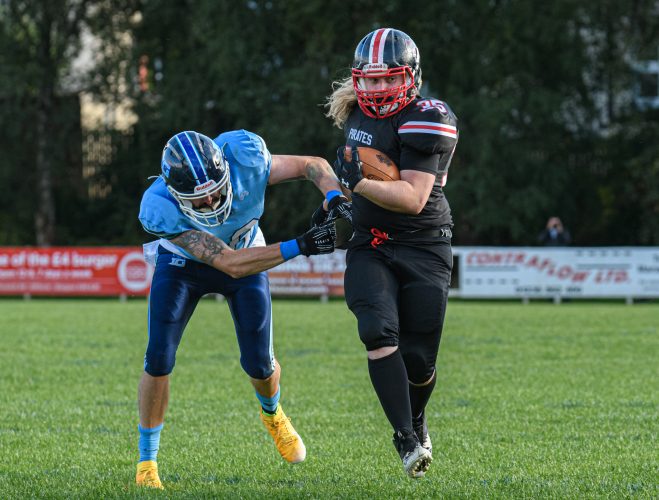 EK kicked off the second half and soon forced Inverclyde to punt. A short drive from good field position ended with an 8-yard TD pass to David Fallon, converted once again by McDonald. East Kilbride now had a strong hold on the game , and a Ker Stuart interception set up the next score.

Having thrown for 3TD’s, Baptie decided to get in on the act himself, showing an impressive turn of speed to run the ball home from 64 yards. This was followed by a successful McDonald PAT. A third TD of the period was added when Baptie found Craig Black in the endzone from 18 yards. Despite the PAT attempt going through the uprights, the extra point didn’t count as it had deflected off a Pirates lineman on its way, ending the attempt at that moment.

At the start of the final period, EK moved the ball 30 yards on three runs by Gordon Wallace, the third being a 2-yard score. McDonalds’s conversion ended the scoring at 43-6 and also saw the introduction of a “running clock” as the lead had passed 35 points. The teams managed two short, non-scoring drives each before time expired.

The Pirates are next in action on Sunday 5 September against Glasgow Tigers, in their third and final home game of this year’s abbreviated season. Kick off is 4pm at GHA Rugby Club.