The misleading score line does not tell the tale of the Pirates’ poorest performance of the season, as they toiled against a side they had beaten convincingly just two weeks earlier. East Kilbride simply failed to get into their stride in a staccato game interrupted by incomplete passes, injured players, and more flags than a Sheldon Cooper podcast. A palpable air of antagonism between the two sides, possibly carried over from the previous encounter, also contributed to the malaise.

The game itself saw EK take the ball first but only move it to midfield before punting on what appeared to be Third Down. Glasgow then put together a long drive, running the ball deep into Pirates’ territory before coming up short on a 4th-and-1. The visitors then had possibly their only error free drive of the day. Three strong runs by Dougie Meechan and a Neil Baptie to Fraser McDonald pass completion took the ball to Glasgow’s 5-yard line, from where Meechan carried home. 73 yards in just five plays was rounded off by a Scott McDonald PAT for a 7-0 lead. Despite this promising start, there was to be no further scoring in the first half. 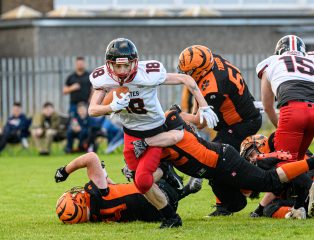 Following some carefully chosen words from Head Coach Jamie McLaughlin, EK came out more focused after the break. This saw them extend their lead late in the third period. A short drive ended with a 33-yard pass from Baptie to McDonald and though the PAT was blocked, the Pirates now had some breathing space. Their next possession saw the contest move into the 4th Quarter before Baptie found rookie receiver Ssarien Liddell from 25 yards for a TD. Meechan ran in the 2-point conversion to take the score to 21-0. That advantage was stretched again on the next drive, Baptie passing to David Fallon from 25 yards, but the PAT was blocked once more. The final touchdown was a 21-yard run in by Baptie with running back Duncan Harrington tagging on the 2 extra points.

A strong finish shouldn’t be allowed to paper over the cracks, and a much improved performance will be required when travelling to take on Edinburgh Wolves on October 3rd 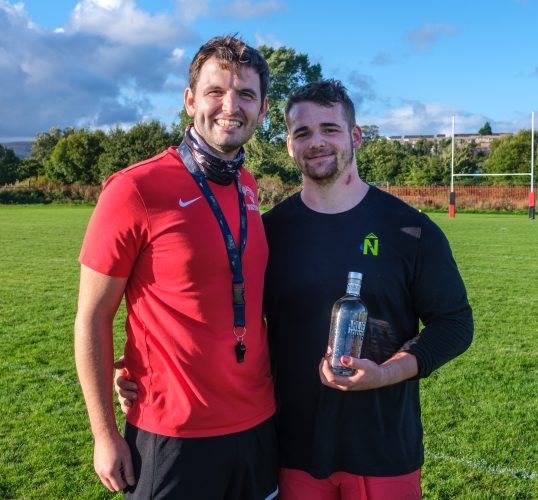