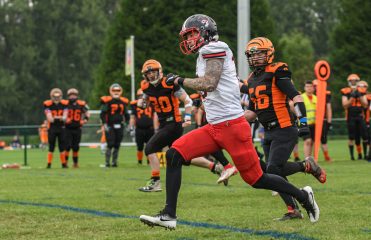 East Kilbride secured their third win of a shortened season with a comfortable 57 point win over near neighbours, the Glasgow Tigers.

After both teams had to punt away possession on their opening drives, it was the visitors who had the first opportunity to score. However, the 35-yard field goal attempt drifted wide left of the posts. This near miss prompted a response from the Pirates, and they took the lead soon afterwards. A short drive ended with a 25-yard TD run from Dougie Meechan, converted by Neil Baptie’s PAT kick. 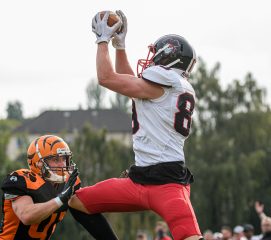 The home side had possession as the game moved into the second Quarter. Strong running by Gordon Wallace moved the ball to Glasgow’s 7-yard line, and from there Baptie connected with wide receiver Fraser McDonald for the score. The point after attempt was blocked, leaving the Pirates 20-0 ahead. East Kilbride were now in full flow and looked to have scored again on a spectacular pass to McDonald.

However he was adjudged to have been tackled at the 1-yard line, so it remained for Wallace to power home on a short carry. A 2-point conversion pass to Martin Gallagher completed the first half scoring. Glasgow did have the ball in the endzone following a 41-yard run on a reverse play, only to see it called back for a penalty.

EK received the kick off at the start of the second half, and were quickly back on the front foot.A 63-yard breakout run from Baptie added a further 6 points. However, a second blocked PAT left the score at 34-0, delaying the introduction of a running clock. 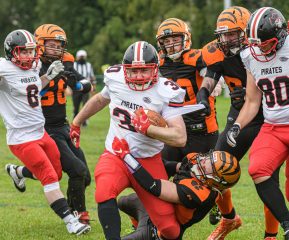 That wasn’t far away however. A short Tigers’ punt gave the Pirates great field position and they immediately took advantage with a 23-yard Baptie-McDonald connection. Meechan also ran in the 2PAT to stretch the lead to 42-0 and initiate the accelerated game time (clock keeps running during stoppages). This didn’t prevent EK from extending their lead though. Baptie found Gallagher for a 30 yard TD and Duncan Harrington added the 2 extra points.

In the abbreviated 4th Quarter, East Kilbride managed one final touchdown, ending the game as it had started, with a Dougie Meechan rushing TD. Scott McDonald kicked the conversion to leave the score at 57-0 as time expired.