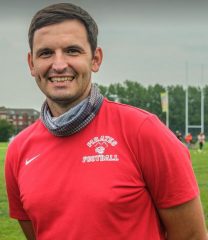 Following a successful end to the 2021 season, current head coach Jamie McLaughlin has decided to step away to spend more time with his imminently expanding young family.

Jamie has been involved with the Pirates as a player and coach for nearly 15 years. He leaves his head coaching role on a high note, after the senior team won the Caledonia conference and secured the top spot in Scotland. Although he’ll no longer be a regular fixture on the field, he’ll continue to be closely involved with the club’s back-room activities as a committee member.

Defensive coordinator Andrew McGowan takes over as senior team Head Coach with immediate effect. Andrew, a former veteran linebacker and defensive captain for the senior team, has been DC since 2018. His extensive coaching experience includes stints as senior team linebackers coach, head coach of the Pirates women’s contact team and defensive coordinator for the Glasgow University Tigers. As a player he represented Great Britain as part of the national programme squad for their Milan campaign in 2013.

Jamie commented: “It feels great to have at least righted the ship and brought the club back to a division-topping status – even if the eventual goal of returning to the Premiership and competing for the Britbowl title hasn’t been achieved yet. This is the right time to step back though, and I have no doubt that Andrew is the right man for the continuing job. His defensive units have been the engine room in the Pirates return to success, and the 3.3ppg average this season is a clear example that the team is ready for a run at the Prem again.” 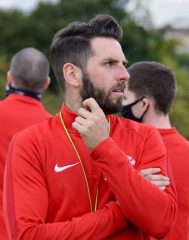 Andrew commented: “I’m massively excited to take on the role and continue the great work that has been put in by Jamie over the last few years. Our relatively young squad puts us on a great footing for developing the team to compete at the highest level in the UK. I can’t thank Jamie enough for getting the team to this position and with the support of such a well oiled organisation I know we have the ability to continue to be a force to be a reckoned with within the British leagues.”

Club Chair Amanda McDonald commented: “We’re delighted Andrew has agreed to take on the role of head coach. His commitment to the club and record as defensive coordinator speaks for itself.  With four shutouts and only three scores conceded, our low points against record this season enabled us to take the top spot in the conference when it went down to tiebreakers. The team’s in very safe hands. I’m also very pleased Jamie will continue to be closely involved in the management side of the club, helping us continue to be sustainable and successful.”