Pirates end on a high note 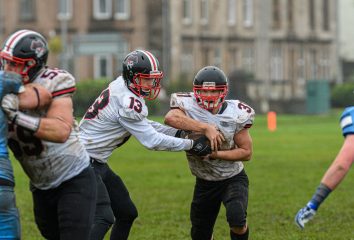 East Kilbride brought down the curtain on their truncated, post-Covid 2021 campaign with a shut-out victory at Battery Park in Greenock. In doing so, they secured top spot in the Caledonia Conference Championship.

After receiving the kickoff and returning it into Goliaths’ territory, the Pirates took just 4 plays to open the scoring. An 8-yard TD run by Gordon Wallace was successfully converted by Neil Baptie for an early 7-0 lead. That advantage was improved on EK’s third possession when Baptie passed to Andrew McBride from the 16-yard line. However the conversion kick was wide of the mark on this occasion. There was then to be no further scoring until the 3rd Quarter.

It was well into that period before East Kilbride increased their lead. Again it was QB Baptie with the scoring pass. His target this time was David Fallon who reeled in a 22-yard catch. Wallace ran in the 2-point conversion to make the score 21-0 at that stage. 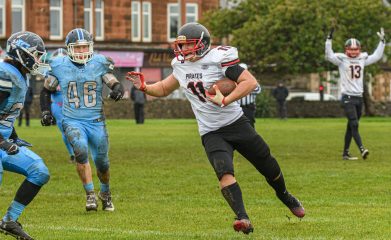 With the small Inverclyde squad tiring, there were two more scores in the final quarter. Firstly debutant Greg Black carried the ball home from 15 yards for an unconverted TD, while his twin brother Mathew later also got in on the act with a 2-yard run. Baptie then added the 2PAT to round out the scoring.

The introduction of the Black twins, along with linebacker Fergus McNiven saw those players moving up from the Junior squad. More should follow next year, and the future looks bright for the team as the benefits of the Youth & Junior set up are developing. That future however will not be under the tenure of Head Coach Jamie McLaughlin. After 15 years as player and coach, he has announced that he is stepping down to spend more time with his young family. Defensive Co-ordinator Andrew McGowan will move into the HC role for 2022. 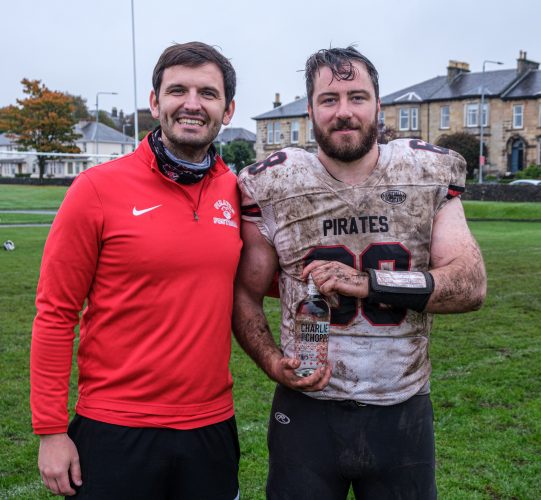