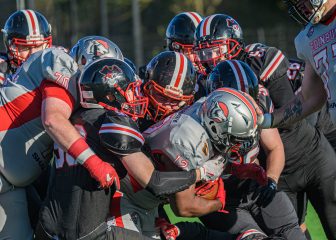 The two sides vying for the Scottish Caledonia Conference title met at Edinburgh University’s Peffermill Playing Fields on Sunday. East Kilbride had triumphed 14-0 in the Week 1 encounter and they had both won all their games since.

The Pirates got off to the worst possible start as they fumbled away possession on the opening kick-off return. Edinburgh instantly made their opponents pay, passing for a 29-yard TD on the first play after the turnover. A successful PAT meant an immediate 7-0 advantage for the home side. EK went 3-and-out on their next two drives, and as the first period drew to a close, Edinburgh stretched their lead. A short Pirates punt, blown out of bounds by the strong crosswind, gave the Wolves possession inside Pirates’ territory. They moved the ball to the Pirates’ 4-yard line before completing another TD pass on 3rd-and-Goal. The Extra Point was good putting the Wolves in a strong position. However, both defences were on top from that point and neither side looked like scoring for the remainder of the first half.

Early in the 3rd Period, Edinburgh did get close enough to try a Field Goal, but the 24-yard kick was blocked by East Kilbride. Similarly, in the final quarter, another Field Goal attempt by the hosts failed to split the uprights. On this occasion the 33-yard attempt was pushed wide left.

So the Pirates suffered their first defeat of the Season but still hold on to top spot by the narrowest of margins. With the head-to-head between the sides level, the next tie breaker is Points Conceded. East Kilbride have conceded 6 points fewer so must win their final game and give up less than 6 points to win the Conference. That fixture sees them travel to face Inverclyde Goliaths on 17th October. 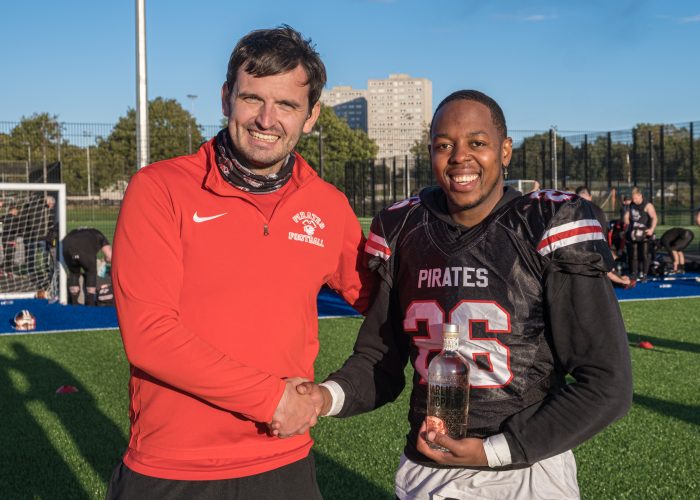