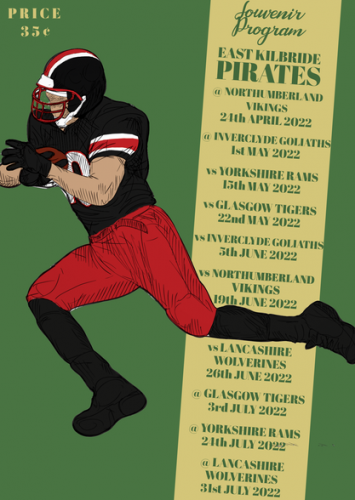 After a shortened campaign in 2021, the East Kilbride Pirates have their schedule for the new campaign, and preparations have begun for the new season. After only six games in 2021 due to the Covid-19 pandemic, the Pirates finished the season in dominating fashion topping the Caledonia conference table. A convincing victory over the Inverclyde Goliaths sent the Pirates off into the offseason in a positive mood for the preparations to begin for a full season in 2022.

With the action set to begin in April, the Pirates hosted their rookie day this last week and look to bolster the squad. On the 24 April 2022, the Pirates make their first trip down south in over two years as they travel to take on the Northumberland Vikings. The Vikings convincingly finished their season with a huge win over the Gateshead Senators. A trip to Druid Park is on the cards for what could be a big game in the NFC North 1 division.

At the start of May, the Pirates are back in Scotland for a game against the Inverclyde Goliaths. Inverclyde had no answers for the Pirates in the shortened 2021 campaign as the Pirates dominated both games by a combined score of 78-6.

Up next is the start of five home games for the Pirates and the chance to string a few wins together. First up at GHA Rugby Club is a visit from the Yorkshire Rams. Another team from south of the border that the Pirates didn’t get a chance to play in 2021. Up next is a visit from the Glasgow Tigers, another team the Pirates dominated in 2021. East Kilbride beat the Tigers 35-0 away from home and 57-0 at home. Hopefully, they can keep that form up in 2022.

A home game against the Goliaths at the start of June is then followed by two home games against opponents from south of the border. Northumberland make the trip to Giffnock in the return fixture from opening day and then the first game of the season against the Lancashire Wolverines rounds off a busy month for the Pirates.

After what will hopefully be a strong homestand the Pirates finish the season with three away trips. Firstly they travel to take on the Glasgow Tigers before finishing with two trips down south to take on the Yorkshire Rams and the Lancashire Wolverines.

Having the chance to play five home games in a row will allow the Pirates to get momentum and go on a bit of a run and hopefully have a commanding lead at the top of the division and a shot at post-season football.