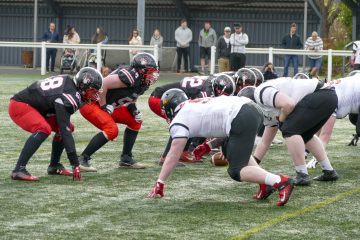 Northumberland Vikings 14 – East Kilbride Pirates 17
Following the lack of competition in 2020 and the Covid-shortened  campaign in 2021, the Pirates kicked off their 2022 League season with a trip to Newcastle. The Vikings already had two wins under their belts and were keen to maintain their positive start.

On a bright but breezy day, EK kicked off and quickly forced the hosts to punt. A tentative first period saw neither side able to maintain any Offensive momentum, with a series of short drives. As the Quarter drew to a close, Northumberland finally started to move the ball into Pirates territory. However, on the last play of the period, Pirates’ DB Brodie McDonald picked off a Vikings pass and returned it 80 yards for the opening score. Scott McDonald duly added the PAT for a 7-0 lead.

The second Quarter followed a similar pattern, with frequent changes of possession. Both defences were on top in a hard-fought game and the sides traded interceptions as the contest moved towards the interval. The second of those picks went to Ryan Miller and it set up EKP for their second score. QB Neil Baptie completed  to Struan Bailey before finding Andrew McBride for a 44-yard TD. Scott McDonald again converted and the Pirates took a 14-0 lead into the break.

The tense encounter continued into the 3rd Quarter, with both sides frequently giving up possession. A quote of “more turnovers than Greggs” seemed appropriate, with a total of 6 interceptions and 4 fumbles throughout the game. The Vikings finally got on the board midway through the period. A 10-play drive concluded with a 22 yard pass from Henry Bulmer to Cooper Sloan. The same duo tried to add the 2PAT, but that pass fell incomplete.

The home side’s tails were now up, and they levelled the scores in the final period. Another Bulmer – Sloan TD from 11 yards with a repeat for the 2PAT tied things up at 14-14. The teams swapped punts before EK came up with the game winning drive. 6 consecutive carries by Dougie Meechan, with a Defensive PI call in among them, took the ball to the Northumberland 24 yard line. On 4th-and-10, the decision was taken to go for it, rather than attempt the Field Goal. That decision paid dividends when Bailey came up with a clutch catch at the 5-yard line. A run for 0 yards then a spiking of the ball stopped the clock with 3 seconds left. Scott McDonald calmly slotted the 27 yard FG straight down the middle for the win.

The Pirates now travel to face Inverclyde Goliaths at Ravenscraig Stadium on Sunday 1 May, kicking off at 1pm.