Pirates Dictate Narrative In Tale Of The Bank 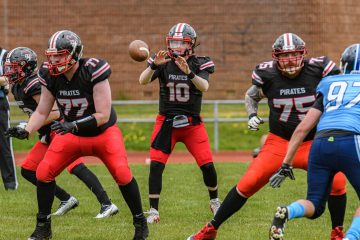 Having won in Newcastle the week before, East Kilbride made the shorter journey to Greenock on Sunday to face Inverclyde Goliaths.

With Sam Montgomerie starting at QB, the Pirates kicked off and, after the initial exchanges, took the lead on their second drive. A 26-yard pass to Angus Mackintosh, followed by a 21-yard QB keeper by Montgomerie took EK to the Goliaths’ 22-yard line. From there running back Dougie Meechan carried the ball into the endzone then Elliott Sorbie kicked the PAT for a 7-0 lead. 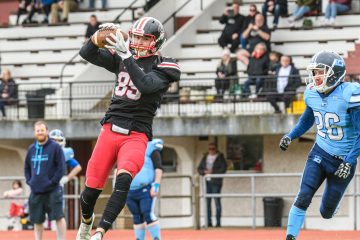 The home side went 3-and-out on their next possession and the Pirates took immediate advantage. A 5 play drive was capped when Greg Black ran the ball in from the 1-yard line. Sorbie again converted, giving his team a 14-0 advantage that they took into the second period.

The visiting defence held strong, even when a Pirates’ fumble gave up good field position, and forced an incomplete pass on 4th Down. There were no further mistakes by the EK offence, who went on to score on successive possessions. Firstly, Meechan added a second TD with a short run that Sorbie converted, then Montgomerie found Fraser McDonald with a32-yard scoring pass. Sorbie again added the PAT giving the Pirates a 28-0 lead as the interval approached. Inverclyde managed to reduce that gap before the break however. A break out run by QB Bud McFerren took them from deep in their own half to the EK 8-yard line. After three rushes gained only 7 yards, McFerren took to the air on 4th Down, completing to Fabio Marturano for the TD then the QB ran in the 2-point conversion to end the half.

East Kilbride received the kick off and steadily moved the ball upfield until they came up just short on a 4th-and-14 attempt. The defence quickly forced a punt and a penalty on the kicking team gave the Pirates the ball in Inverclyde territory. A short drive concluded with Meechan notching his third TD, this time from 7 yards out. An attempted 2-point conversion was unsuccessful, but EK now held a 34-8 lead. The period ended with Defensive Lineman Andy Meechan pulling in an interception to give the visitors the ball at the start of the 4th quarter.

The turnover led to more points when Montgomerie sent an 18-yard pass to McDonald on 4th Down, but the 2PAT failed once more. EK soon got the ball back following a 4th Down sack by Sorbie, allowing Montgomerie to round off a short drive with a 7 yard run, but Sorbie’s PAT was adjudged to have gone wide. It only remained for the Goliaths to have the last word. Their final possession found its way to the EK 2-yard line courtesy of a Pass Interference call, and from there McFerren ran the ball into the endzone. The 2PAT attempt was stopped short, leaving the final score at 46-14 in the Pirates’ favour.

Next up for the Pirates is their first home game of the season. On Sunday May 15 they host Yorkshire Rams at GHA Rugby Club, G46 6EB. Kick off is at 15:00 and is preceded by an U19 game between the Pirates U19s and Gateshead Senators.