The Pirates’ unbeaten start to the season continued with a convincing win against Inverclyde Goliaths. Seven first-half possessions brought seven touchdowns as the home side blew their opponents away.

Inverclyde kicked off and East Kilbride immediately hit the ground running. 5 carries by Dougie Meechan in a 7-play drive, ended with him scoring from 12 yards. The PAT was wide right, but this was to be Scott McDonald’s only miss of the day. Next to score was fellow running back Greg Black. He finished a wholly rushing, 65-yard, drive with a 5-yard carry, before McDonald added the conversion for a 13-0 lead.

Black scored again on the first play of the second quarter, with another 65-yard drive. This time though, the young running back did it all himself on just one carry. After the home defence forced the Goliaths to go 3-and-out, QB Sam Montgomerie connected twice with Struan Bailey. The first for 26 yards and the second was a 34-yard TD. A Ryan Miller interception brought the next Inverclyde drive to a quick conclusion, and after the turnover, Black capped the drive with his 3rd TD of the day. 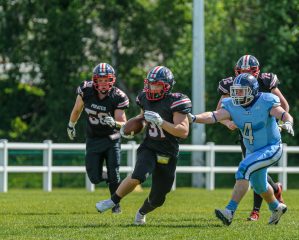 It was deja vu all over again, as Cammy Dunn picked off a McFerren pass and EK turned it into more points with an 11-yard Montgomerie – Bailey pass, duly converted by McDonald. There was still time for a fifth TD in the period. On this occasion Montgomerie targeted Andrew McBride who caught the ball in stride, before outpacing the Goliaths defence for a 42-yard score. At this stage nothing was going right for Inverclyde. A wayward snap deep in their own territory rolled into the endzone, where the QB kicked it out of play for a Safety. From the ensuing restart, Bailey returned the kick 67 yards for a TD and McDonald’s Extra Point left the visitors trailing 57-0 at the interval.

Credit goes to the Goliaths for continuing into the second half. Indeed it was they who were next to score. With a running clock in operation, there were only three drives in the third period. EK’s ended with a 4th Down sack of Scott McDonald, now playing at QB. From there, Inverclyde put together a 10-play drive that concluded with a 2yd scoring pass from McFerren to his receiver on the last play of the period. After McFerren ran in the 2-point conversion, the teams changed ends before the restart. 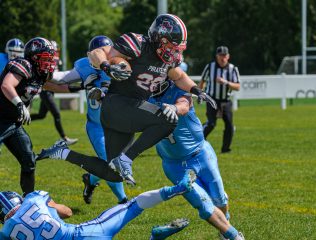 Neil Baptie returned the kick off back into the Goliaths’ half. This set up Black for his 4th TD, carrying the ball 37 yards, breaking tackles as he made his way to the endzone. The visitors’ woes then returned with another poor snap on 4th Down and the Pirates took over at their 2-yard line. Despite sacking McDonald for a 5-yard loss, they couldn’t stop the QB finding Meechan for the closing TD on the next play. McDonald ended the scoring at 71-8 with his final kick

The Distell International Game MVP award went to running back, Greg Black for his 4 TD performance as well as his strong, tackle breaking runs throughout the game.

Next up for the Pirates is the return fixture against Northumberland Vikings at GHA Rugby Club, G46 6EB on Sunday 19 June. The Pirates won narrowly in Newcastle, but results since then have shown that the Vikings will be their closest rivals in the race to the Divisional crown. The game is scheduled to kick off at 15:00. 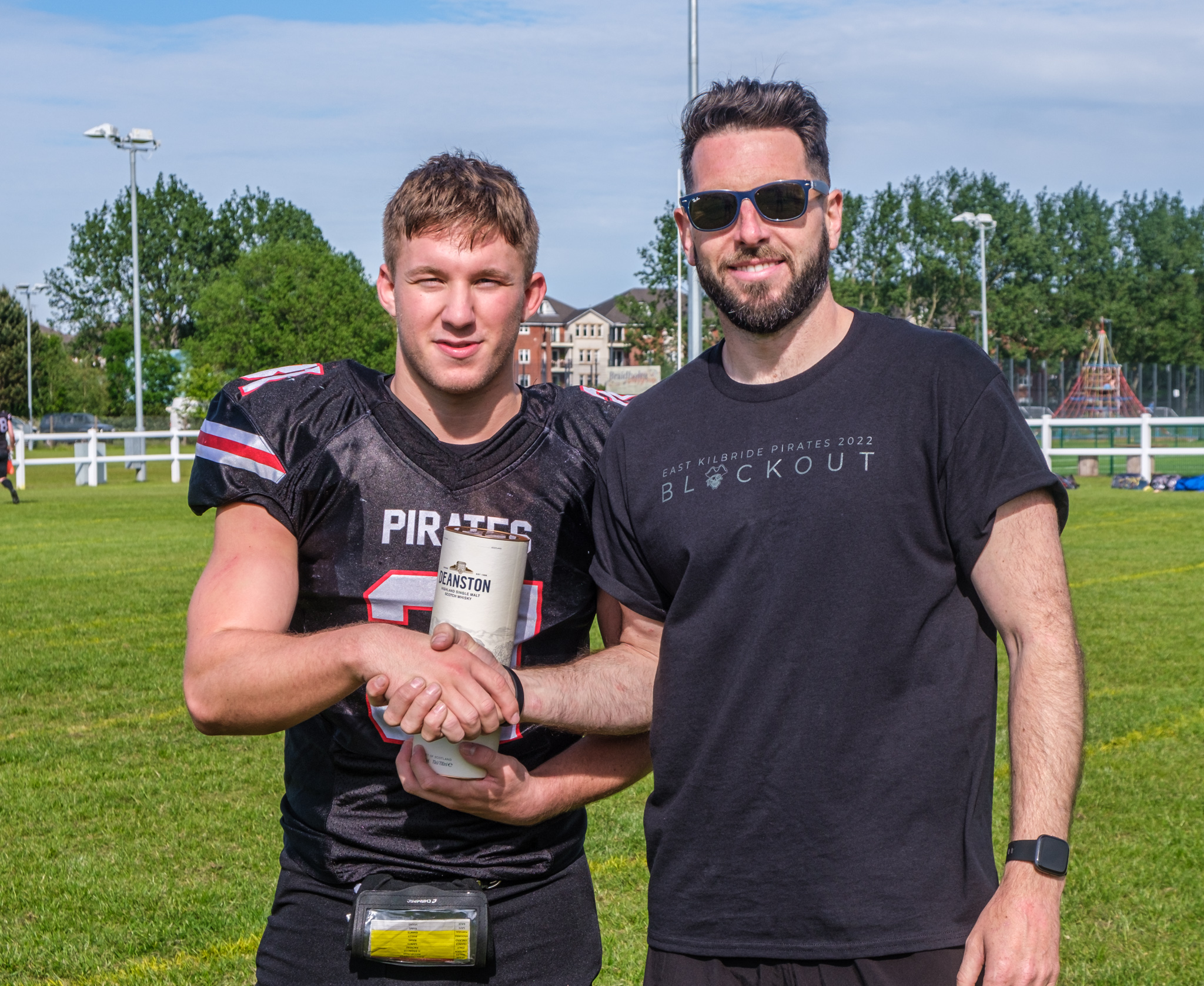