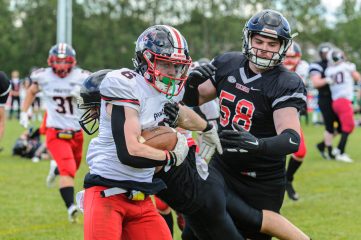 East Kilbride suffered their first loss of the season and dropped to second place in the Division as a result. Having won in Newcastle earlier in the campaign, hopes were high that the Pirates could continue their unbeaten run. However, Sunday’s opponents were determined not to let that happen.

Northumberland won the toss and elected to receive the ball. Their confidence was well placed as they put together a near-perfect opening drive, concluded by a 9-yard pass from QB Henry Bulmer to his receiver Cooper Sloan. The visitors attempted a 2-point conversion, but failed to find the endzone. The resulting kick off was short and out of bounds, giving the Pirates good starting position near midfield. However, just two plays later, QB Sam Montgomerie connected with Fraser McDonald, and as the big receiver tried to gain extra yards, the ball popped loose and was recovered by Northumberland who gratefully scooped it up and returned it 51 yards for their second TD. Again the 2PAT attempt was unsuccessful, as it would be all day. East Kilbride were moving the ball well at this stage, but stalled when a 39-yard Field Goal attempt by Scott McDonald fell agonisingly short of the target. The Vikings went on to extend their lead before the end of the first quarter, Bulmer again doing the damage, this time connecting with Jack Mulholland from 21 yards. 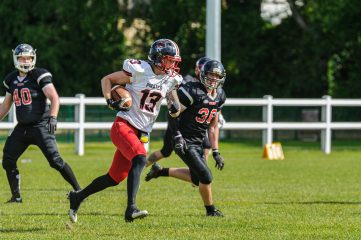 East Kilbride reduced the deficit early in the second period, following an exchange of turnovers. Montgomerie saw a pass intercepted, but a Ryan Miller fumble recovery immediately regained possession. A 7-play drive ended with Dougie Meechan running the ball in from 11 yards and McDonald duly kicked the PAT to make it 07-18 at that point. Just before the break, Northumberland restored their three score advantage when the Bulmer-Sloan connection again came up trumps. Another 11-yard TD was to prove to be the final points of the game.

Sam Montgomerie didn’t re-appear or the second half, having suffered an ankle injury as well as aggravating an existing hamstring problem. Scott McDonald took over at QB, and despite having to deal with several high snaps, performed well. In the third period EK came closest to adding to the scoreline. Another Field Goal attempt from 39 yards was pulled wide of the post, then in the final quarter the Pirates did find the endzone when McDonald passed to Neil Baptie only to see the score negated by a Holding penalty.

The Distell International Game MVP award was shared between Rob Hayes and Mark Stewart, with both players playing almost every down of the game, on both sides of the ball.

The Pirates must now quickly get their focus back as they face Lancashire Wolverines this Sunday (26th). Kick off at GHA Rugby Club is 14:30. 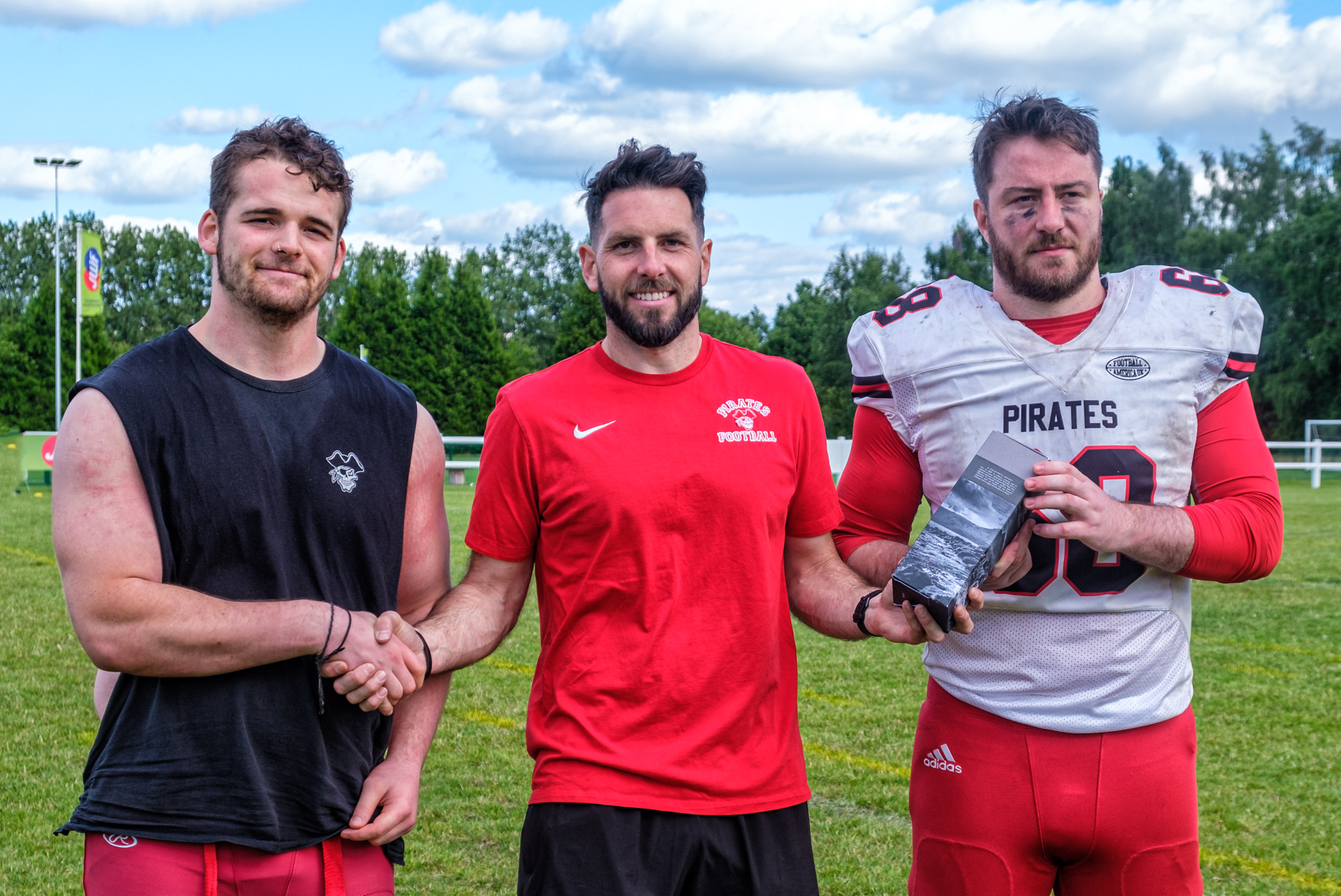