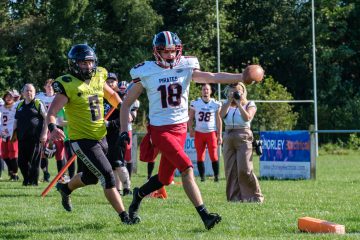 Having secured their place in the play-offs last week, East Kilbride needed a win to also secure the NFC 1 North title, along with a home game in the first knockout round. Determined to do so, they were quickly out of the blocks in this encounter.

After forcing a quick punt from the home side, EK put together a faultless first possession. An 8-play drive was rounded off by a 7-yard run from QB Neil Baptie to open the scoring followed by a successful PAT by Scott McDonald. An Aaron Callaghan interception immediately put the Offence back onto the field, and this time Baptie passed to Struan Bailey for an 8-yard TD before McDonald kicked the extra point for a 14-0 lead. Just before the end of the period, he also attempted a 33-yard field goal, but saw the ball bounce back off the upright. 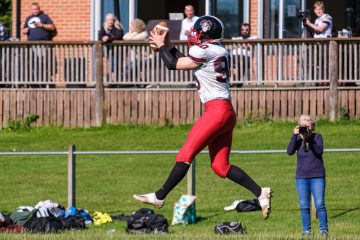 Lancashire’s first drive of Q2 also ended in an unsuccessful 33-yard field goal attempt, with Pirates’ player Liam Coyle coming up with the block before Ryan Miller recovered the loose ball. From there, it was only moments before Baptie again found an open receiver, with Fraser McDonald scoring on a 31-yard reception which his namesake converted. As in the first period, a Pirates’ interception brought the Wolverines’ progress to a sudden halt, Ker Stuart nabbing the ball out of his opposite number’s hands this time around. It was running back Greg Black’s turn to capitalise, breaking several tackles on his way to a 31-yard TD. Unfortunately, like his earlier field goal attempt, Scott McDonald’s PAT hit the post with a resounding clunk. He did get the chance to redeem himself just before the interval, but a 40-yard field goal attempt drifted wide left.

With a 27-0 lead in place, it was perhaps understandable that EK’s foot would come off the gas, although the coaching staff were less than happy with a scoreless third quarter. Their dismay was compounded when the home side scored early in the final period. A 45-yard catch and run took them deep into Pirates’ territory before QB Josh Mills found James Schofield from 7-yards and a successful PAT narrowed the deficit to 07-27. Unfortunately for Lancs., this shook EK out of their lethargy, and a crisp, 8-play drive ended with a 16-yard scoring pass from Scott McDonald to Malcolm Fore, which McDonald also converted to conclude the scoring. 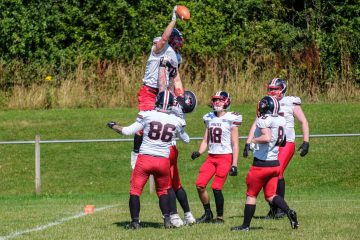 At the end of the game, Lancashire very sportingly formed a guard of honour to congratulate East Kilbride on their success. A gesture which was greatly appreciated and reciprocated by the Pirates’ players.

The Pirates will now face divisional rivals, Northumberland Vikings in the first round of the play-offs. With the Vikings being the only team to defeat EK so far this season, a close encounter should be assured as the two sides compete for the right to meet the NFC 1 South representatives in the next round. The game at GHA Rugby Club kicks off at 14:30 on Sunday 14th August. 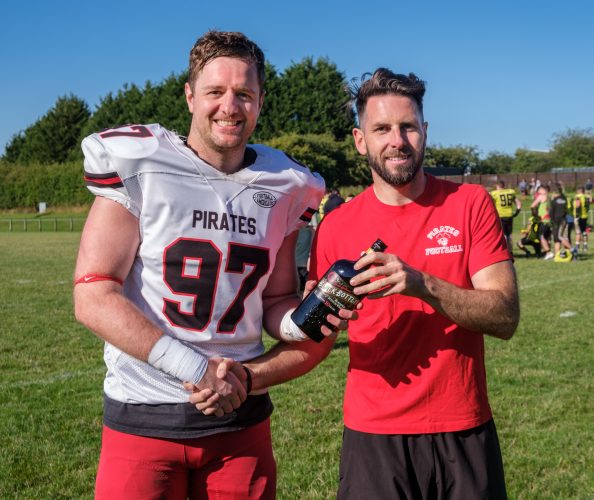