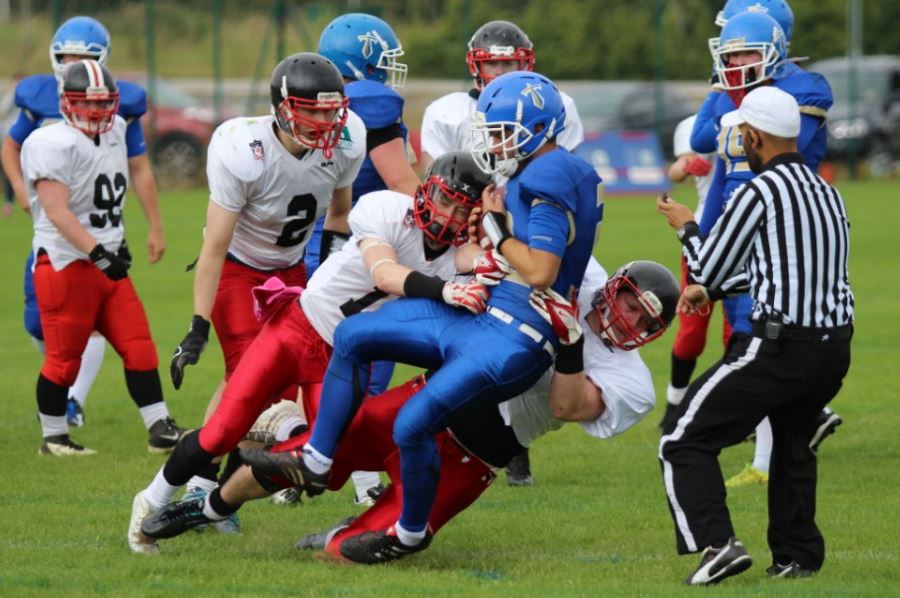 The season of success continued for the Pirates Junior side when they added the title of Northern Conference Champions to that of Scottish Divisional Winners. They now have the opportunity to complete the set by winning the National Champions’ crown later this month.

With half of their gameshirts having been left at home, the young Pirates took to the field in unfamiliar white jerseys, borrowed from nearby Lancashire Wolverines. They received the kick off and QB Nick Kosic set about orchestrating a solid opening drive.

Eight plays later they had reached the Titans’ 19 yard line before having to settle for a field goal attempt. Unfortunately Darren Robert’s low kick was blocked at the line of scrimmage and recovered by the home side. Manchester were unable to gain a First Down though and had to punt. Two penalties against the Pirates on the play pushed them further back into their own territory before EK’s brief second drive. After gaining good yardage, running back Will Price fumbled the ball away. The defence held strong however, pushing the Titans backwards and forcing them to punt once more.

The second quarter started well for East Kilbride when Darren Robert pulled in an interception, returning it to the Titans’ 16. He was soon called upon to again try to open the scoring with another field goal attempt. This time the kick drifted wide of the right hand post and the deadlock remained.

Manchester ended their next possession on another punt, and another penalty against EK, followed by a False Start, meant the drive began at their own 3-yard line. 12 plays saw them march down field to the Titans’ 2-yard line. From there, Kosic appeared to run the ball home, but was ruled to have put his knee down before crossing the line. He tried again but was stopped short for no gain. With the Pirates in “hurry-up” mode, Manchester called for a Time Out with just 1 second left on the clock, East Kilbride capitalised when Jack Hunter powered home to open the scoring, just as the half ended. The same player also ran in the 2-point conversion to give the Pirates an 8-0 interval lead. 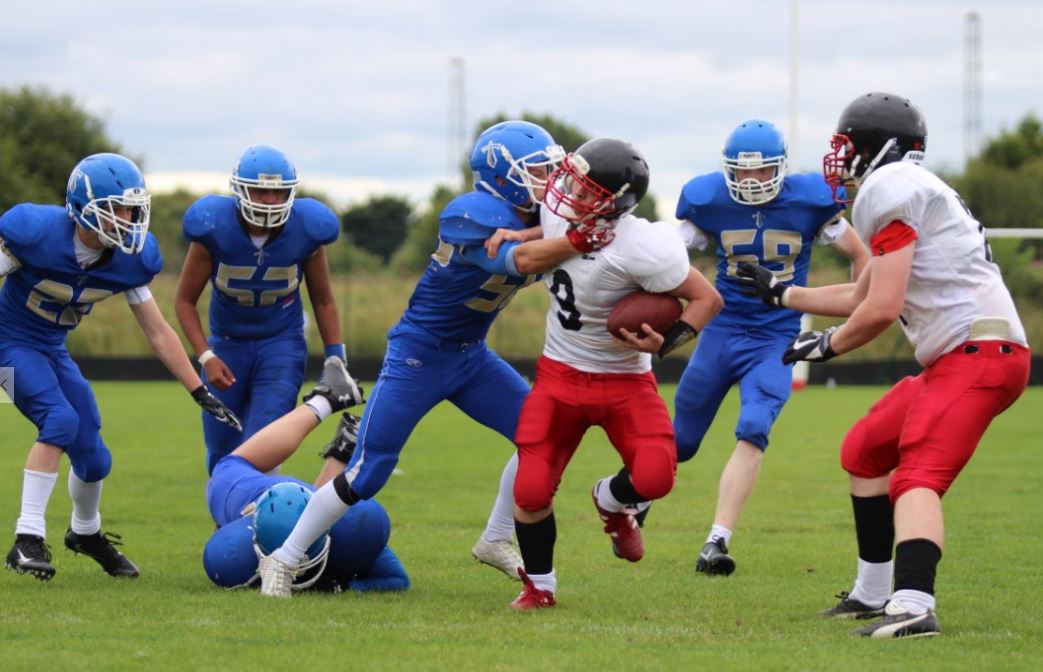 The tight encounter continued after the break, and with both teams favouring the running game, time was galloping past. Indeed, the Pirates only had one possession in the third quarter, with a 12-play drive that was stopped on a 4th down, being sandwiched between two Manchester punts. This gave EK the ball as the final period got under way, and they made it count. Another long drive covered 59 yards in 10 plays before Kosic passed to Matthew Irvine for a 12 yard TD. Will Price ran in the 2PAT, extending the lead to 16-0.

Manchester’s response was short lived, as they coughed up the ball on the first play after the restart with Darren Robert recovering. A 16-yard run by Ryan Davies looked to be heading for a third TD, but he was stopped just short of the goal line and the Pirates were unable to force it home. The home side then put together a 10-play drive, taking them into Pirates territory, but time expired before they could turn the possession into points.